Raoultella Ornithinolytica is a gram-negative, capsulated, aerobic, non-motile bacterium belonging to the family Enterobacteriacae. It is a rare but emergent cause of human pathologies such as urinary tract infection, sepsis, septic arthritis, neonatal sepsis, especially in immunocompromised patients.

We describe the first case of external otitis sustained by Raoultella Ornithinolytica in an immunocompetent host.

A 54 years-old man with no history of relevant disease came to our attention referring otalgia and otorrhea since a week. Secretion was sent for culture and sensitivity test, during which time he started a topic therapy with Neomicin empirically. After a week patient came to our attention with a worsening of the symptoms. Increasing of otalgia and purulent otorrhea. Culture was positive for Raoultella Ornithinolytica that was sensitive to Ciprofloxacin and Levofloxacin. After ten days of treatment with oral Ciprofloxacin and topic Levofloxacin there was the complete resolution of pain and inflammation.

Raoultella Ornithinolytica must be taken into consideration as an emergent cause of human infection, also in case of external otitis. Infection can be severe and can occur both in immunocompromised or immunocompetent host. Culture and sensitivity is mandatory to choose the proper therapy and avoid potential severe complications.

Raoultella Ornithinolytica is a gram-negative, capsulated, aerobic, non-motile bacterium belonging to the family Enterobacteriacae. It has been isolated from insects, water, fish. It can produce histamine because of histidine decarboxylase enzyme and can contaminate food especially not well conserved fish and pork. This rare but emergent bacterium can cause a wide spectrum of clinical manifestations. The genus Raoultella, that include also R. electrica, R planticola, R terrigena, has a not well clarified role as a pathogen but it can be responsible of bacteraemia especially in patient with malignancies [1]. R. Ornithinolytica is responsible for urinary, bile tract, tracheal, bronchial and lungs infections in patients with any kind of immunodeficiency. The majority of these cases are community acquired especially nosocomial [2]. Neonatal sepsis is a very rare event that can be severe if not treated with a proper antibiotic therapy [3]. In literature is described that in a case of septic arthritis of the temporomandibular joint (ATM), after an early but temporary response to the antibiotic therapy, this bacterium lead to a complete demolition of the articulation [4]. Recent study demonstrate R. Ornithinolytica can cause the sgombroid fish intoxication with cutaneous flushing, nausea, vomit [5-6]. Generally sensitive to the most common antibiotics (fluoroquinolones, trimetoprim/sulfamethoxazole), Raoultella is naturally resistant to aminopenicillin thanks to the production of beta-lactamases. It can acquire genes for multi-drug resistance, this explains why Raoultella can be found on clinical material as well as in the natural environment (insects, water, etc.) [7].

A 54 years-old man came to our attention referring right earache and otorrhea since a week. No history of relevant systemic pathologies. In 2012 miryngoplasty for tympanic membrane perforation of right ear. In 2014 septoplasty and turbinectomy for nasal obstruction. He denied systemic symptoms. Pain at the pressure of the tragus. No cranial nerve palsy. Otomicroscopy of the right ear showed hyperemic external auditory canal with a small quantity of purulent secretion that we provided to aspirate. Tympanic membrane is impossible to visualize because of the narrowing of the external auditory canal. Normal examination of the tympanic membrane of the left ear. Secretion was sent for culture and sensitivity test; during this time we started topic Neomicin empirically. After a week patient came to our attention with a worsening of the symptoms (increasing of earache and purulent otorrhea). Culture was positive for Raoultella Ornithinolytica that was sensitive to Ciprofloxacin and Levofloxacin. Based on the antibiogram we started an oral therapy with Ciprofloxacin 500 mg twice a day for six days. We prescribed also a topic therapy with drops of boric acid 3% in alcool 70° and 5 drops of Levofloxacin twice a day for six days. After another week with the antibiogram based therapy we observed the resolution of the symptoms. The otomicroscopy of the right ear showed a dry cavity with only a small granulation on the anterior superior clock face of the tympanic membrane that disappeared after another ten days of boric acid drops.

Raoultella Ornithinolytica is a rare and emergent cause of human infection. In fact R. Ornithinolytica increases virulence by his ability to develop multi-drug-resistance that can cause severe complications especially in immunocompromised host. The bacterium is responsible of sepsis, peritonitis, arthritis, urinary tract and throat infection [8-9]. In literature there are only two cases of external otitis sustained by Raoultella Ornithinolytica [9] but not discussed in detail and in patients immunocompromised and hospitalized for other pathologies. Thus the case we described is, to our knowledge, the first ear infection in an immunocompetent host. Thanks to the culture we found an unexpected bacterium and, basing on the sensitivity test, we were able to give the most proper therapy. This therapy consisted both of a local therapy (Levofloxacin) and of a systemic one (Ciprofloxacin), that is what we use and always suggest in severe case to eradicate the infection and avoid complications. We recommend also surgical toilette of external auditory canal before starting and during the treatment, to provide a higher efficacy of the local drops.

Nowadays Raoultella Ornithinolytica is an emergent bacterium that can also affect head and neck district. Otologists have to take into consideration the infection sustained by this bacterium. Infection can be severe and can occur in immunocompromised, rarely in immunocompetent host. We believe that culture and sensitivity test is mandatory to choose the proper therapy and avoid potential severe complications as sepsis, arthritis, meningitis. Systemic therapy prevents spreading of the infection while topic therapy heals local district. Further studies have to be done to understand the entity of the diffusion of the bacteria and to avoid the development of multi-drug resistance. 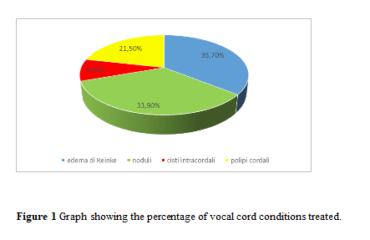 THE EFFICACY OF EVAN® IN POST-OPERATIVE TREATMENT OF BENIGN CORDAL INJURIES: AN OBSERVATIONAL PILOT STUDY. 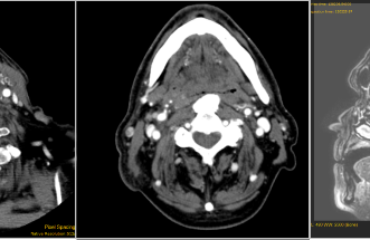